How Will Artificial Intelligence Work In Healthcare?

How Will Artificial Intelligence Work In Healthcare?

When it comes to artificial intelligence (AI), it seems that no matter the environment, there are always two parties: staunch defenders and unconvinced skeptics. And to be sure, any new technology carries the same burden — Do the benefits outweigh the potential downfalls?

Everyone seems to have a different opinion.

For now, let’s look at some of the most recent news concerning the marriage between AI and healthcare. Later, we’ll get into some fears and potential drawbacks that this new form of technology has posed. 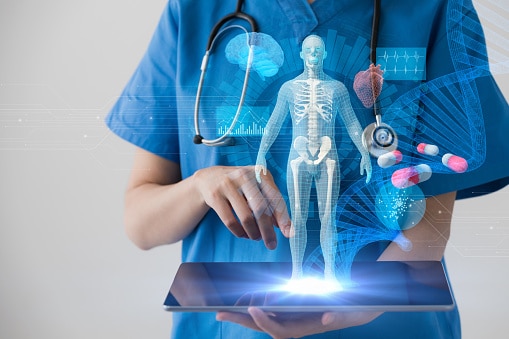 What’s New in the World of Healthcare and AI?

While you don’t see robot doctors rolling down the hallway in hospitals quite yet, there are still many artificial intelligence tools being used on a regular basis in the healthcare industry. For example, AI is often used in precision medicine to allow for detail work in risky surgeries. It’s also used regularly in cardiac care and routine colon screenings.

The FDA is finally starting to clear new AI technology.

For a long time, the U.S. FDA (Federal Drug Administration) seemed to be taking forever to examine and clear new artificial intelligence technology.

Now, it’s catching up with the changing times and has recently cleared several intelligent software algorithms. Some of these algorithms scan CT scans for common problems while others analyze data, attempt to detect atrial fibrillation in heart patients, and do many other tasks that humans used to do.

Larger AI systems are being anticipated, but not so widely implemented.

There’s definitely a lot of hype around artificial intelligence, but not many hospitals and healthcare facilities are actually making changes that will allow for its immediate implementation. What does that mean for you? It means that now is the ideal time to get involved in developing new AI equipment and tools or at least investing in their development.

Not everyone is onboard with AI.

Those who aren’t on board? Often, it’s executives.

The only way these guys are going to bankroll new technologies is with some proof that it will be worth the investment — because investments in these areas are significant, and the price tag is what holds a lot of executives back from giving the green light. When proponents can show that the return on investment will be worth it, however, that’s the only time that execs seem interested in supporting brand-new AI systems and software algorithms — and this all comes down to showing the data.

Are There Drawbacks to AI in Healthcare?

Yes, certainly. Below, we’ll focus on two of the main concerns people have about AI in the healthcare industry.

Or lost to computers, if you prefer; however, for all intents and purposes, human doctors, nurses, and other medical staff will be replaced by de facto robots.

Either way, just as in any other industry (see grocery store checkout lines, customer service, assembly line work, and more), AI is edging out the real-life competition. This will not only cause widespread job loss, but it will also disrupt the relationship between patients and their caregivers.

While a majority of the healthcare industry is driven by science (and technology) and the possibilities these fields can create for increasing lifespan and wellness, there’s also a large portion of healthcare that’s driven by compassion and humanity’s general desire to care for and heal each other.

Naturally, this is lost on AI.

As such, the caring concern, encouragement, and inspired confidence that a good doctor or nurse can provide will be gone when cold, hard, short-circuiting computers take their place.

If a human makes a mistake in a human-driven industry, it’s bound to be found out rather quickly. And checks and balances in any pharmacy, doctor’s office, or hospital are primarily run by humans at this point. But wait several years, and you’ll see computers taking over these, often monotonous jobs of double checking, updating, and editing.

Indeed, there are many details of healthcare that computers get right more often than humans, but there are also details that computers probably won’t ever get right — seeing and noticing handwritten memos, detecting typos that could technically be correct but that — logically — are not, and recognizing other errors that just don’t make sense.

Computers can’t do these things. They “make sense” of whatever you tell it to make sense of initially, and they don’t “care” if something “seems off.”

As backup and checks and balances systems become more computer-driven, then, this leaves room for errors at the source that will eventually make it all the way to the patient — without anyone noticing.

While many people have genuine concerns about what AI will do to healthcare, it’s evident that momentum in research, development, and implementation isn’t going to stop. As of right now, there’s just too much hope (and money) wrapped up in the AI industry. In the end, only time will tell how this new technology benefits us — or hurt us.