Is Virtual Reality For Real In Healthcare?

Is Virtual Reality For Real In Healthcare? 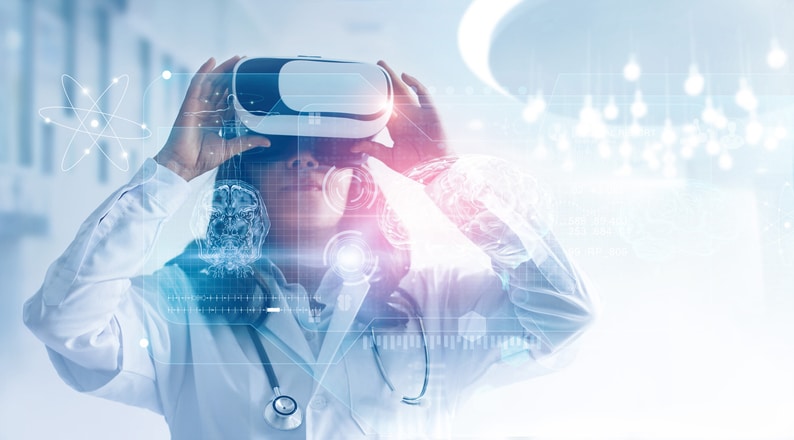 Over the last couple of years, both the concept and the real world application of Virtual Reality (VR) has moved from the fringes of our imagination, into everyday use.

What was once a technology that was considered as only beneficial in computer games and futuristic projects designed never to come to fruition, is now infiltrating many areas of our lives. The military, education, entertainment, fashion, and even engineering are all being touched by the power of VR, but it is the healthcare sector where it is really making waves.

Notably, during the previous 18 months, something of a virtual reality revolution has taken place in terms of health-related applications. We may well still be in the early days of releasing its full potential for patients and medical practitioners, but so far it seems that VR is becoming something of a tangible reality in healthcare.

Here are just some of the pioneering ways that VR has been integrated into the healthcare industry to improve the lives or both patients, and doctors.

Around 1% of the global population sits somewhere on the autism spectrum. With no preventative methods, no cure, and little understanding of why it occurs, therapeutic treatments are the only way to help those afflicted. Language and speech therapy can offer significant improvements in an autistic individuals quality of life, but previously this therapy had to be done face-to-face. This posed a number of limitations depending on the location and level of mobility of the individual, and it also means doctors are restricted to practicing in certain geographical areas.

But with VR this doesn’t have to be the case. Some startups have begun to utilize technology to simplify the delivery of therapy to autistic individuals, without the need for travel. Products use VR to create social interactions by creating virtual characters in a digital scene. For example, instead of sitting in a doctors office and looking at toys on a table, the individual will see a panda in a virtual safari park that they can interact with accordingly. Each environment can be specially tailored to include the appropriate sensory environment for each patient- something that is hard to do in ‘real life’.

The concept of virtual surgery is being used in both to educate trainee medical professionals, but also to give surgeons a chance to rehearse complex operations before the real thing.

By allowing trainee doctors to conduct medical procedures in a VR situation, their confidence and experience can be built on significantly. Being able to perform a surgical procedure on a virtual patient means they can practice new techniques and skills in a ‘real’ setting, without ‘real’ consequences.

For more experienced surgeons, the ability to walk through a complex or lengthy surgery before having the live patient on the operating table can allow them to deal with a variety of outcomes, as well as to troubleshoot or practice tricky maneuvers.

Over 25 million people in the US alone, suffer with chronic pain. These people resort to the long-term use of painkillers and opioids which carry their own risks and contraindications, including addiction and death. As a result, doctors have been searching for a way to provide safer, more effective, and less problematic alternatives as quickly as possible. Virtual reality has been suggested as one way of doing just this and so far studies have show that it can help to reduce pain by around 25%.

Virtual reality therapy has been shown to not only reduce pain in patients, but to stop the brain from processing pain the same way. This can lead to reductions of in-patient time as well as decreased dependency on powerful prescription drugs. By helping to distract the minds of patients in pain, the world of VR can release stress which in turn contributes towards the alleviation of pain. Allowing patients to escape the four walls of hospital or their homes and to swim with dolphins, take a helicopter ride, or play a game of tennis, has a significant impact on their mental and subsequently, physical wellbeing.

Providing visual and motion-based experiences has been found to work in positive ways on several parts of the brain, leading to increased rehabilitation rates and enabling them to live a more normal and less painful life.

Vision impairment affects around 150 million people around the world, in varying levels. Whether it is age related or caused by a medical issue or injury, it severely impacts the patient’s ability to live normally.

Low vision is not easily treated with glasses, medicine, or surgery, and until recently, those afflicted had little choice but to learn to adapt. Now, with the use of VR, levels of vision can be increased by allowing the patient to magnify certain objects in a visual scene without losing sight of the rest of the environment. Certain software applications allow users to literally zoom in on certain things without impacting the rest of the ‘scene’. Users are then able to adjust the contrast, text, or ambient level, allowing them to carry out normal activities with more ease.

Care of the Elderly

When dealing with elderly patients, it can be difficult for younger medical professionals to understand the situation and limitations that age imposes on patients. For example, an age difference of 50 years between patient and doctor can create a significant disconnection between the two, resulting in frustration and breakdowns in communication.

VR, however, is helping to change this. By harnessing virtual reality technology, doctors and nurses are able to experience what growing old feels like or what recovering from a stroke is really like. Applications have been created where the user is able to experience life as an elderly person, see the world through their eyes, and experience as realistically as possible, how everything from movement to sight can be severely limited. It is hoped that this kind of experience will bridge the gap between elderly patients (especially those that are non-verbal) and caregivers to increase the level of care offered.

Strokes are one of the leading causes of brain trauma and to stand a good chance of recovery, patients need to start therapy and rehabilitation as soon as possible. In some communities and circumstances however, this is not always possible.

By using virtual reality, patients are able to practice regaining the functions they have lost such as moving their fingers or lifting their arms. Whilst the patients are not actually carrying out the actual movement, the motivation, engagement, and activity of the brain is improved through the use of audio-visual feedback. It is understood that this can lead to significantly improved recovery time for those who have suffered significant neurological trauma and injury.